As they often say, “Imitation is the sincerest form of flattery”.

A photo of a floating Hornbill on the front page of a local newspaper caught my attention the other day.

Another floating birdie craze in the making by way of Hong Kong, now arriving Malaysia?

Gosh! (Aint’ Florentijn gonna make a bundle out of his copyrights?  The artist’s page is here if you are so inclined)

The news article explained that this is the RM60,000 “Water UBAH” mascot  funded by the DAP political party supporters and sponsors which went afloat on July 15 in Penang (‘Ubah’ means ‘change’ in Malay).   The PVC rubber UBAH hornbill was completed in two months and inspired by Florentijn Hofman’s giant floating Rubber Duck which went viral worldwide after docking in Hong Kong.  Weighing approximately 250kg, the UBAH hornbill stands half the original Giant Rubber Duck size of 16.5m, at a mere 7.6m tall and 8m wide.

Hang on, the naysayers rightly pointed out, ‘Hornbills can’t swim!’

Why of course!  However, if you step a bit closer, mind the water’s edge,  the hornbill is sun-bathing on a buoy!  Humph!

Let me rewind back to an early post entry of the Giant Rubber Duck in Sydney Festival earlier this year (here).  (And I CANNOT recall the Duck making such a phenomenal splash in Sydney as it did in Hong Kong)

Since I was in Hong Kong in June, I can tell you of the maddening crowds that gathered at Ocean Terminal where it was berthed for a month.  There were scores of people each day competing to take pictures with the Rubber Duck, there were duck memorabilia everywhere and duck merchandises for sale.  Even the property owner of Ocean Terminal, The Wharf Holding’s Ltd (SEHK:0004)  stock price jumped 10%!  This was how crazy Hong Kong was about the Rubber Duck!

The 16.5-meter-high inflatable sculpture, which made its first public appearance in Hong Kong on May 2, was on showcase at the Ocean Terminal for a month. 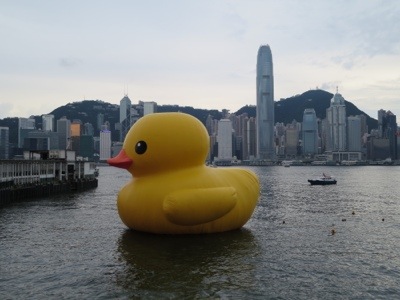 Duck against the backdrop of Victoria Harbour

Even restaurants geared up to the Duck’s crazies by creating special duck dishes.  This was my friend’s photo and if you google hard enough, you will find a lot of creative and interesting dishes created especially to celebrate the arrival of the Duck.

Then rather unceremoniously, it ‘died’.  Rumour had it that it was deflated for maintenance reasons.  Mini discontent ensued since some tourists from the Super-nations had toured to Hong Kong especially to take photos of this now Dead Duck.

About a week later, the Duck arisen and made everyone happy again.  The said Duck then set sail from Hong Kong on June 8 to an unknown destinations, possibly somewhere in America?

No matter how silly the whole Duck scenario was, it added a touch of light-hearted fun and childhood nostalgia into the lives of the otherwise ordinary mundane lives of people.  Can this Floating UBAH Hornbill in Penang do the same (if not for political change, then creativity in the local arena?) 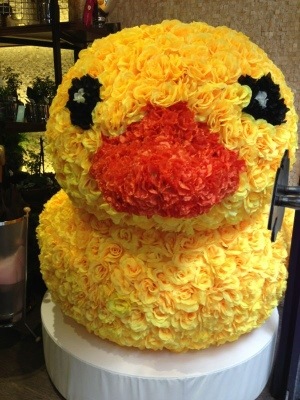 11 thoughts on “The Floating Hornbill – A Rubber Duck Reincarnate?”